When winter no longer comes, what will the North look like?

Dr. Contosta was interviewed for this informative and thought-provoking story on Massive Science. “The loss of winter is how people in New England are experiencing climate change on the ground right now” said Contosta who led the new research. This year, it does seem like we’re seeing these changes play out, with early snowmelt and ice-out yet again.

Our study was discussed, alongside other excellent work in Maine’s and the region’s forests, in this recent FFMF blog.

The past weekend included record high temperatures across much of New England. Read more about it here, in an NHPR story. Great information from team member Dr. Liz Burakowski and some photos from Dr. Alix Contosta!

Recent press about our work:

Press from north of the border: Manitoba Winters Getting Shorter

Changing Winters was on TV too! Alix Contosta and Liz Burakowski were featured in a story on WJAR (Rhode Island) in which the station dug into their own winter data to confirm the patterns. They did a great job explaining weather vs. climate too.

Winter Weather Whiplash was featured in a new Yale E360 story about whiplash in multiple seasons and environments, here. Project co-lead Contosta explains more about WWW at the end of the article.

“While there are numerous researchers looking at different parts of these phenomena, the largest-scale project to look at the impacts in a comprehensive way is the 2-year-old project called Winter Weather Whiplash and Its Impacts on Socio-Ecological Systems. The team includes a dozen interdisciplinary researchers — ecologists, sociologists, and economists — looking at what whiplash events mean for people and the natural world.”

In November 2019, our work was featured in EOS, Earth & Space News. Check out the article, “New England Winters Are “Losing the Cold” here.

In October 2019, several media outlets featured stories about our work investigating 100 years of changing winters (Contosta et al. 2019, Ecological Applications).  Stories about this paper were featured in the Boston Globe, Science Daily, and Business NH magazine, among others.

How climate change may affect winter ‘weather whiplash’
E&E News | Chelsea Harvey
There’s nothing like a wave of wacky weather to spark discussions about climate change. In the last few weeks, temperatures in the Midwest and Northeast have swung wildly from bone-chilling cold to unseasonably warm, in some places jumping more than 50 degrees Fahrenheit in the span of just a few days. It’s a case of “weather whiplash” – a sudden shift from one set of weather conditions to another. And now, experts are questioning whether the changing climate may affect some kinds of winter whiplash events. The answer, as with most questions related to global warming: It’s complicated. But there may be some links. In recent years, scientists have proposed that climate change may drive an increase in weather whiplash in some parts of the United States. But studies have rarely focused specifically on winter weather. They’ve often focused mainly on precipitation, either during the growing season or on year-to-year time scales. One 2018 paper, for instance, suggests that California will see an increase in both extremely wet and extremely dry weather. As a result, the state will experience an increase in the frequency with which an extremely wet year follows an extremely dry one. “I think, in general, the impacts of changing winters are less understood than growing season, and so this is another example of that,” said Alix Contosta, an environmental scientist at the University of New Hampshire. 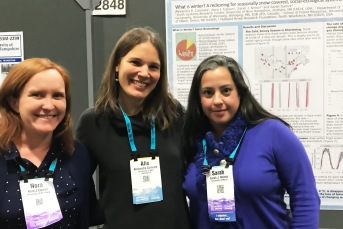 Members of the Winter Weather Whiplash team were interviewed at the AGU Annual Meeting in December 2018, resulting in this story.